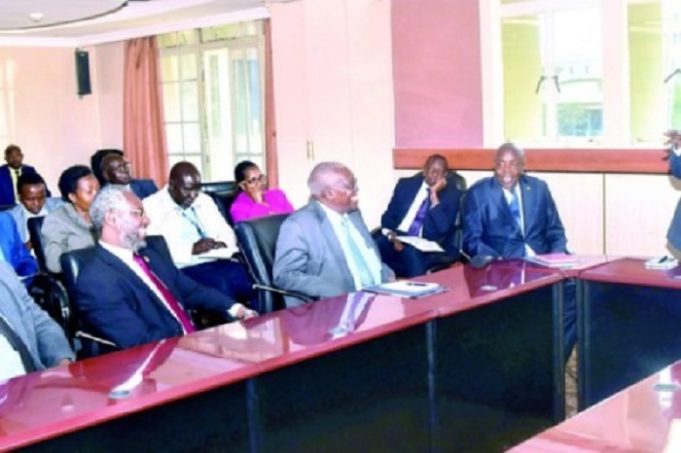 The task force looking into the education system now wants the country to have a five-year transition period to phase out the 8-4-4 system.

During the five-year training period, the government shall have addressed the issues of teachers’ preparation, curriculum changes, parental responsibility and required infrastructure.

According to the Presidential Working Party on Education Reform, within that period, the country would have developed adequate infrastructure for the new education system.

In a preliminary report scheduled to be presented to President William Ruto any time soon, the task force also wants the current Grade 6 pupils scheduled to sit for their national Kenya Primary School Education Assessment (KPSEA) to be hosted in their present primary schools.

JSS will remain hosted in existing primary schools for a two-year period after which the task force would have made a permanent decision on where it would specifically be domiciled.

And in a radical departure from the recommendations by Prof Fatuma Chege on the Competence Based Curriculum (CBC), the Prof Raphael Munavu led task force wants the structure changed from the original proposed 2-6-3-3-3 structure to 2-6-2-4-3 .

That means that if the task force report is adopted, pupils will go through 2 years in the Pre-primary /Early Child Development Education (ECDE); 6 years in primary; 2 years in JSS (or any other name); 4 years in senior secondary school; and 3 years in tertiary/university. The Teachers Service Commission (TSC) will also be required to immediately identify primary school teachers who will undergo a month training on how to manage Grade 7 pupils next year.

The preliminary report only addresses the anticipated transition to Grade 7 as the issues of Grade 8 curriculum; delivery and others would be dealt with in subsequent reports. The task force also wants the Ministry of Education to commission a team of qualified personnel for an end term evaluation of the 8-4-4 system and present their findings before it is phased out to pave way for full implementation of CBC.

“This will prevent CBC from facing similar challenges that 8-4-4 went through,” a member of the task force intimated.

Should the government adopt the recommendation to domicile JSS in the existing primary schools, it would have the problem of an imminent crisis that could result from the double intake of at least 2.5 million learners in Grade 6 and Standard Eight to Form One.

In January, pioneer learners under the new 2-6-3-3-3 CBC system will transition to junior secondary school after sitting the Grade Six national examinations.

It is also the year that present Class Eight learners under the 8-4-4 education system will join Form One after sitting KCPE examinations, thereby presenting a huge infrastructure challenge of hosting at least 2.5 million children.

The committee appointed by the President on September 30, that is supposed to be in operation for a six months, is also required to submit to him a progress report every two months from the date of their appointment.

The team, chaired by Prof Raphael Munavu, comprises other globally celebrated Kenyan teachers Peter Tabichi, Mutheu Kasanga, who were part of the CBC task force as well as Prof Collins Odete among others.

The team is expected to study all laws governing the basic education subsector and make recommendations for review of the legislations with a view to addressing “duplication, ambiguities, efficiency, constraints and improving linkages.”

The team is required to study, assess and make recommendations on “the conceptualization and implementation of key tenets guiding the competency-based approach including but not limited to value-based education, community service learning, parental empowerment and engagement.”

They are also to assess and come up with a framework for assessment and examination, quality assurance, teacher education and training as well as teacher deployment.

They are also to assess and come up with a framework for assessment and examination, quality assurance, teacher education and training as well as teacher deployment.