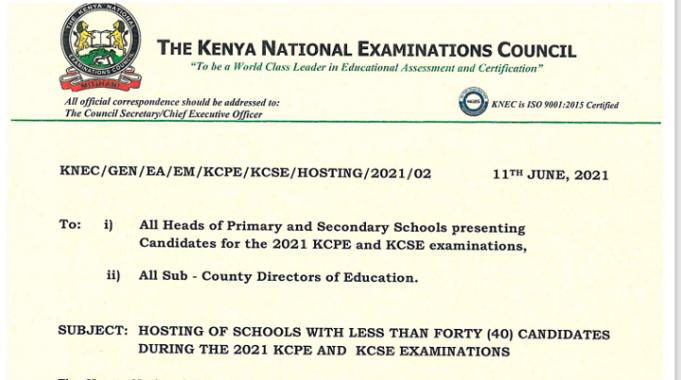 The Kenya national examinations council, KNEC, has declared that schools with learners below 40 will not host KCPE OR KCSE exams but will rather be hosted by other schools that have the minimum required threshold.

In a KNEC circular to all heads of primary and secondary schools and all sub county directors of education, KNEC amended a directive it gave earlier, which would only affect schools having below 15 candidates.

“As guided by the ministry of education, all head teachers of primary school and principals of secondary schools from both private and public schools with less than 40 candidates will be hosted by an examination center with more than 40 candidates during the 2021 KCPE and KCSE examinations,” reads section 1.2 of the circular signed by the outgoing KNEC CEO Nancy Karogo.

TSC Confirms that July Slots Will be PNP, not Internship:Current Interns Likely to get confirmed

This new directive will affect most sub county day secondary schools since the candidature in such schools is mostly below 40, even with the much hyped 100% transition. To participate in 2021 KCPE/ KCSE, the affected schools will have to seek a school within their sub county that has more than 40 candidates to host them.

A similar directive had been released by KNEC in May 2021, but the candidature range was too small, between 6-14. This would only affect fewer schools since the range was narrower.

KNEC has stressed that the host school should be located in the same sub county where the hosted schools are and both the host and the guest school must be served from one container during exams.

The heads of the hosted schools will not be contracted as center managers during the KCPE or KCSE period. Only the host principal will be authorized to collect the examination materials from the container, coordinate the conduct and return the candidates answer scripts to the container during each day of the examination.

The directive has been faulted by most education experts, arguing that if it had to happen so, then it would be better if two or three schools with below 40 candidates merge in one of the schools. According to the experts, one cause of under enrolment is catchment. Two schools in the same catchment area, especially in the village, are likely to have fewer candidature.