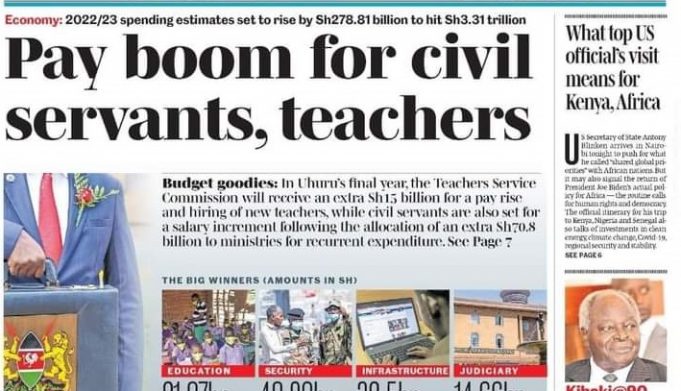 Revealed: Details of the 2022/23 ‘Payboom’ For Teachers and Civil Servants

Teachers and civil servants are among the biggest winners in the final budget President Kenyatta, which is projected at ksh3.31 trillion next year.

The Teachers Service Commission, TSC, will receive an additional ksh. 15 billion for the 2022/23 financial year. Sources within the treasury have hinted that the extra money will be for teachers’ pay rise and recruitment of additional teachers.

Civil servants will not be forgotten in the budget since the National Treasury has allocated an additional ksh70.8 billion to the ministries for recurrent expenditure, annual pay rise for civil servants included.

D+ Requirement In Maths To Become A Teacher Lifted: KUCCPS

Games Teachers To Submit Quarterly Progress reports on the implementation of P.E and Sport policy

The move by Treasury Cabinet Secretary Ukur Yatani, as directed by president Kenyatta will see TSC budget rising next year to ksh 296.6 billion from ksh281.7 billion this year.

A member of the National Assembly Education Committee that, the additional funding “is to appease teachers who are unhappy and that the government would want to do something about it on an election year:”

It is true that teachers are very unhappy with Kenyatta’s government, especially after being offered a non-monetary 2021-2025 collective bargaining agreement (CBA) through their unions.

Speaking on the additional money, the Salaries and Remuneration Commission (SRC), which announced a two-year freeze on civil servants’ pay rise in July, revealed that it is for the annual salary increments.

A section of teachers however feel that this is a trap by the government to influence them to vote for the states’ preferred candidate in next 2022 general elections. “what is 15 billion and how much can each teacher get from what remains of it after recruitment of additional teachers? This is a trap that doesn’t deserve any celebration,” said a teacher.