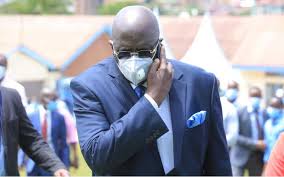 More than 12,000 candidates failed to sit the 2020 KCPE examinations. Pressure is now mounting on heads, teachers and chiefs to account for the missing learners. Compiled data shows that 12,424 candidates missed KCPE Exams, with Nairobi registering the highest number of absentees 1153 out of 66175 registered candidates.

In Bungoma County, 581 out of 55334 missed KCPE examinations while in Nakuru county, 572 missed out of 56527.Data further shows that some 562 candidates did not sit examinations in Turkana.

This revelation now puts heads, teachers and chiefs in a spot in various counties to institute plans to trace the learners. Each pupil in a public primary school receives Sh1,420 in capitations per year. Assuming all the missing candidates were in public schools, each learner ought to have received Sh11,360 during the entire eight years of study.

Education CS George Magoha did not take it easy after realizing that more than ksh 142 million was spent on all the missing candidates in capitation funding during their entire primary school education. In addition to this, the stakeholders argue that taxpayers’ money was used by the government to pay examination fees for all the candidates.

This examination cost was taken up by the government after President Uhuru Kenyatta signed into law the Kenya National Examination Council (Amendment) Act, 2015, which waived examination fee levied on all Standard Eight and Form Four candidates.

Education stakeholders want each of the learners accounted for.“We can still have these children mopped up through the Nyumba Kumi initiative to register for examinations, which will be done later this year,” said Nicholas Maiyo, National Parents’ Association chairman.

Speaking on the sidelines during the release of this year’s KCPE examinations results, Basic Education PS Jwan Julius said once the Kenya National Examinations Council (KNEC) breaks down the numbers per region, measures will be put in place to track the candidates.

“As has always been the case, regional officers down to the villages will be tasked to look for these learners with a view of accounting for all of them,” said Jwan.

A section of the Ministry of Education officials however cited cases of early pregnancy and marriages among girls, while boys may have ventured in income-generating activities like fishing and boda boda business, which kept them away from school. In the pastoral communities, the ministry said many learners moved in search for pasture, while many others were displaced in flood-prone areas such as Baringo. Chiefs are teachers are bearing the pressure since they were the ones to ensure that all learners report back to school after the long covid break.

“Someone somewhere failed in his duty and must be answerable. Chiefs were directed to ensure that all learners reported back to school and teachers were to record data of absentees and report to local administration for tracking. It is obvious who should be blamed for this,” said furious Magoha in a recent interview.