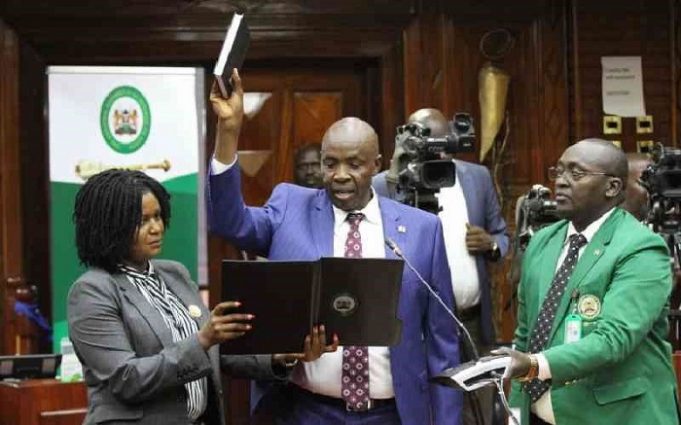 Education cabinet secretary nominee Ezekiel Machogu has promised to crash cartels in the ministry, implement new curriculum and ensure parents do not pay additional levies in schools. He has also pledged to deal with issues around TPD and teacher delocalization.

He said that his fist assignment at Jogoo House 10th floor office will be to do away with persons and rings that collude to fleece government money.

“If there are cartels at the ministry it is time that they start packing and go elsewhere. With me at the helm, I will love value for money. We shall do proper monitoring so that we do not lose any money at all,” Machogu said.

Machogu said that he is aware of parents’ anxiety over the implementation of the Competency Based Curriculum (CBC), citing high costs and burden to learners.

No Teacher Will Be Trained On a Weekend, Oyuu Tells MOE, TSC

But he said his decisions on the roll out will be guided by guided by recommendations of the presidential working party on CBC.

“I will get a roadmap once the team makes recommendations.

It is however clear that parents complain of costs because of then system is capital intensive and they are required to buy many items,” said Machogu.

“I want to assure members that we shall not allow anything that will be costly to parents. The constitution says that education is free and compulsory from primary to secondary. Once I get recommendations of task force we shall look at this,” added Machogu.

He said that presently, the costs of CBC is not manageable to parents.

“It is not manageable with Covid 19 effects and harsh economic times parents are not able to afford certain things as required by CBC,” he said.

Machogu also noted other issues that have emerged over the implementation of the new curriculum, citing teacher training and preparedness.

He said the one-week orientation of teachers is not enough and called on the tutors to make proposals to the working party on what must be done for effective roll out.

“Teachers have also been undertaking training of one week and this is not enough to understand content of curriculum. And therefore that was not the best way. We however have another opportunity to fine tune this.  We are giving teachers chance to give feedback on this and will be considered by the team on how much time is enough for them to understand this curriculum,” said Machogu.

Machogu said that even the CBC assessments will be re-looked into. “We have the formative assessments from grade four where learners get 20 per cent each year to grade six. We shall look into how it is, what instruments are used to know that the measurements are appropriate at that level. To ensure quality of education at that level.”

The Education Cabinet nominee also said that he would address issues affecting universities including funding and staff welfare.

Machogu said that he is aware of the issues surrounding Collective Bargaining Agreements (CBAs) that has caused strain among staff.

“Once I get to office I will engage the national treasury and also talk to MPs so that we call find a solution to these issues,” he said.

He also said that he will ensure implementation of the mandate of Universities Fund to allocate monies to the institutions of higher learning according to criteria established.

Machogu said that he is aware that some cartels at the ministry have frustrated the full empowerment of Universities Fund to release its full mandate.

“Universities Fund will be operationlised. It is not the officers in ministry to do it. The body to dispatch the funds is this institution. During my first month in office this will be operationalized,” said Machogu.

The Universities Fund has continuously received appeals from universities stating that they are unable to meet their financial requirements and statutory obligations.

On the question on whether billions should be sent to private universities to government sponsored students, Machogu said that the matter is largely legislative and asked MPs to amend the law.

“Government gives capitation to all public universities. According to the amendments done by MPs to Universities Act. This is what made it possible for private universities to access public money,” said Machogu.

He said students sent to private universities receive Sh63,000 yet those who go to public is given Sh153,000.

“So far some 86, 000 in private universities accessing funds. This is not a policy matter. It is a legislative matter and MPs can come up with amendments,” said Machogu.

On appointment of universities by the Public Service Commission (PSC), Machogu said that the law will be reviewed to ensure accountability.

“There is disconnect. The body hiring should be able to also fire. But if PSC hires, and then disciplinary processes are taken to the Councils then there is a problem. And MPs may want to look into this. Appointment of chancellors should also be looked into,” said Machogu.

Machogu also said that he will ensure parents are not bombarded with unnecessary funds in public schools.

“I will take necessary remedial action on unnecessary levies.  I will create systems. The structures are already there. I will make sure that parents are not subjected to unnecessary harassment and I will also be accessible.

He said fees guidelines will be followed to the letter. He also said that he would ensure that schools do not force parents to purchase uniforms from specific vendors at prices that bring up cost of education.

“We are in a free market economy and if parents are asked to buy from specific vendors, then there is conflict of interest. Those are the cartels that we shall dismantle. I will not allow existence of cartels,” said Machogu.

Machogu also committed to do away with delocalization policy that has been implemented by Teachers Service Commission (TSC)and to roll out a new plan called nationalization that will entice teachers to work in hardship areas on their own volition.

Delocalisation has been a thorn in the flesh of many teachers who have been forced to work away from their families.

“This will be my first assignment to implement nationalisation. Under delocalization, they did not consider teachers’ circumstances. Under the new plan, where we find a teacher worth to remain in a given place, there shall be incentives for them to remain there. We shall not do what is being being done under delocalization,” said Machogu.

On teacher shortage, Machogu said that the government will employ the first lot of 30,000 in January.

“Internship programmes shall also be institutionalized because it is cheaper and affordable. Once serves as an intern, they can be absorbed permanent terms,” said Machogu.

Machogu also said that he will look into the Teacher Professional Development (TPD) programme that tutors have been asked to part with Sh6,000 for refresher training.

“We shall deal with this and even if it means that Kenya National Examination Council (KNEC) issues certificates directly to learners if teachers continue to withhold certificates,” said Machogu.