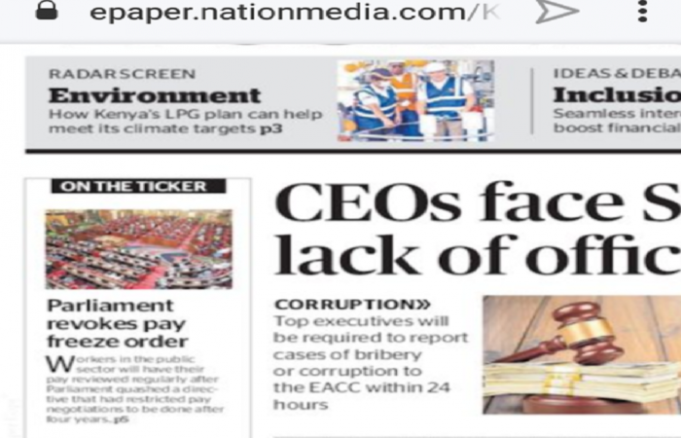 Workers in the public sector, teachers and civil servants will have their pay reviewed regularly after the national assembly quashed a directive that had restricted all pay negotiations to be done after four years.

Parliament revoked three circulars from the Salaries and Remuneration Commission (SRC), which had limited collective bargaining agreements (CBAs) to a four-year cycle for all workers in the public service.

MPs ruled the circulars unconstitutional since they violate workers’ rights to engage in collective bargaining with the employers as provided by Article 41(5) of the Constitution.

The Article stipulates that “every trade union, employers’ organization and employer has the right to engage in collective bargaining.”

“Considering that the Guidelines limit the right to collective bargaining, they must be enacted in strict adherence to constitutional dictates set out in Article 24 of the Constitution,” the MPs said in a report.

This means workers, through unions will be free to negotiate for new pay increases which the commission had frozen. In June 2021, the SRC froze salary increments for all civil servants for two years starting July, darkening their prospects of better fortunes amid tough economic times occasioned by the Covid-19 pandemic.

The suspension affected basic salary, allowances and benefits of all government workers forcing unions to threaten to stage a boycott from work.

The Treasury has been struggling to raise revenues to run the bloated public wage bill that consumes more than half of taxes, impeding spending on development projects.

Teachers’ unions and the Teachers Service Commission (TSC) have however striked a deal leading to signing of non-monetary CBA.

“We are happy to announce that all parties have reached a deal. We have signed a new CBA 2021-2025 but there is room for strengthening it in the future,” said TSC Chief executive Nancy