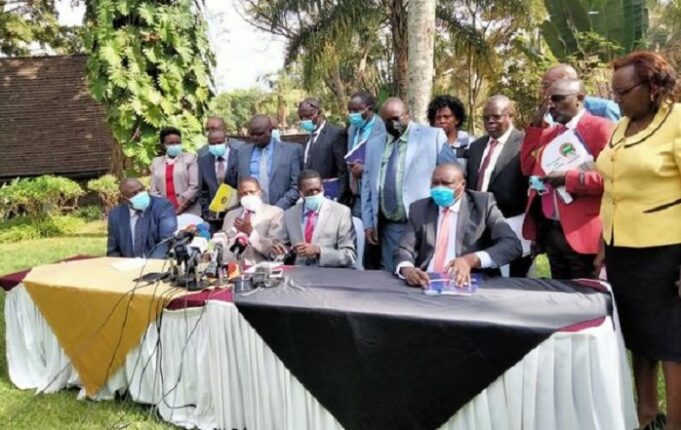 The counter offer given by TSC lacked any monetary benefits to the teacher. However, it has some features which according to Macharia, will improve the welfare of teachers.

Some of the proposals in the TSC counter offer, as reported by by the unions, include;

1.Expansion of maternity leave from a period of 90 days to 120 days

Currently, female teachers are entitled to a maternity leave of 90 working days. TSC now plans to extend this leave by 30 more days. The big question that teachers ask TSC is, what will the new mothers eat with their babies? Several teachers have faulted TSC for this proposal, terming it high level mockery.

2.Fast-tracking of promotions in arid and semi-arid areas

“The teachers will be retained in their current stations until attainment of the substantive grade,” reads the document.

3.Pre-adoptive leave for parents exploring adoption to bond with their children

The counter offer by TSC has captured parents with adopted or planning to adopt children. According to teachers, very few have adopted children and even if they are given a cashless to bond with the children, would they even have the confidence to go?

4. Expansion of paternity leave from 14-21 days

5. transfer for couples who are both teachers

TSC proposes to consider requests for transfer for couples who are both teachers subject to availability of vacancies among other requirements.

The unions have maintained that CBA minus salary review is a joke that cannot and will not be taken by teachers.

“After the current CBA expires tomorrow, the Kuppet National Governing Council will meet within seven days, to deliberate on incipient vacuum and give directions to our members,” the kuppet  statement said.

Early this month, SRC chairperson Lyn Mengich issued a statement indicating that they were still on with the CBA negotiation process and that the commission was looking into submissions made by the TSC regarding teachers’ proposals on salary review.

Union officials, however, said there is still uncertainty ahead after the national Treasury failed to factor in teachers’ salary increment in the Budget.