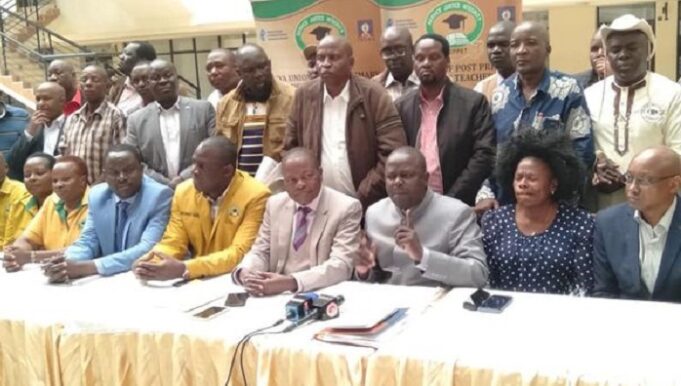 This comes one  week to the expiry of the Sh54 billion four-year salary deal signed between TSC  and unions in 2016.

The new demand also comes after the announcement by Salaries and Remuneration Commission (SRC) that salary reviews will be frozen for the next two years due to effects of Covid-19 pandemic.

“There will be no review of the basic salary structures, allowances and benefits paid in the public sector in the financial year 2021/22 to 2022/23,” said Lyn Mengich.

Kuppet board meeting however resolved to press on with salaries review for the 2021-2025 CBA.

Misori said Kuppet has been waiting for a counter offer to its demands under the new CBA process for more than a year.

In her proposals to SRC, Dr Macharia recommended that teachers below Grade C4 to D5 get a 16 per cent salary increment while teachers in Grade B5 to C3 would get a 32 per cent raise.

“This is therefore to submit to your office the TSC recommendations for your advisory on the remuneration of teachers for the next CBA as required by the Constitution and the law to enable us commence and conclude the 2021-2025 CBA with recognised teacher unions on time,” Dr Macharia said.

Kuppet is now demanding an immediate meeting to streamline the negotiations process, which it says has been hijacked by the SRC, whose mandate is only advisory.

“The purpose of this letter, therefore, is to communicate our readiness to meet your teams at the earliest possible convenience during the remaining days to the expiry of the current CBA,” said Misori.

The union official asked the TSC to take charge of the process to its logical conclusion.

“We urge you (TSC) to expeditiously address this situation by honouring your commitment to negotiate in good faith. In the interest of industrial peace that we have enjoyed under the CBA framework since 2017, then TSC must give union a counter offer without any further delay,” said Misori.

The union also accused SRC for hijacking the pay talks, saying the union is only mandated to engage the employer on salaries reviews.

“SRC cannot by law make summary resolutions blocking negotiations as provided under the Constitution and legislation. Moreover, SRC regulations explicitly state that it does not negotiate with trade unions in the formulation of CBAs,” said Misori.

“If we allow another two-year freeze, it means that they will be sneaking a new cycle of salaries negotiations from four to six years and this will be unacceptable,” said Misori.

He said that the four-year cycle already goes against the International Labour Organisations (ILO) convection and noted that teachers will not sit and watch further breaches.