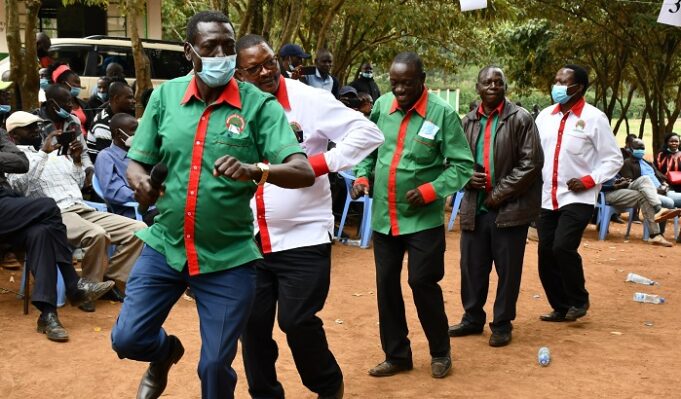 The two who have boldly come out to accuse Sossion of the woes the union is facing have revealed that they are in talks of coming up with any formula that will work and which will send Sossion home.

“I and Oyuu and quite a number of us are together, we want to bring the union back to its former glory and that is our main goal,” said Mutai.

Oyuu on the other side revealed that he was in talks with Mutai and he doesn’t see any problem in them working together in an effort to revamp the union.“We talk every day and there is no problem. A strong team is coming which is a tsunami and there should be no worry about that, whoever who is worried should consult me and get it from the horse’s mouth. This union should be back,” said Oyuu.

However, what should scratch the heads of the two is who among them should exactly go for which seat, a possible winning team and in particular bagging nearly all the votes of the vote-rich Rift Valley Region and other regions of Nyanza, Eastern and Western of which one cannot rule out Sossion in getting overwhelming votes.“We can sacrifice our ambitions so long us we bring back this union. We leave a legacy for the young generation and that is our main objective,” said Mutai.

The two who now seem to direct all their efforts to ensuring Sossion is removed from the leadership of the union, are keen to ensure that they establish a strong team in achieving their objective despite the differences between Oyuu and Sossion on the date of election.

“There is a formula that is being brewed somewhere by the elders of the union and there are some people working on that very soon, we shall announce in a ceremony and we shall launch it as a team that extend from Busia to Lamu and all the corners of this republic,” revealed Mutai.

Fresh Tug Of War Between Oyuu And Sossion-Could Oyuu Be In The Race?

Sources close to the union leadership revealed that Oyuu’s camp is fronting for reverting to the union’s tradition where power was being distributed among regions, with some adding that Mutai could possibly change the game due to overwhelming support he enjoys from Rift Valley region and from majority of the branch Executive Secretaries.

According to the union’s former tradition, the seat of National Chairman used to be allocated Rift Valley, Western and Central regions, while that of the Secretary General was left to Nairobi, Nyanza and Coast.

Could this be the formula, then Mutai will be left to go for the seat of National Chairman hence battling it out with Aggrey Namisi, the Bungoma North Executive Secretary, who has also declared interest in the seat while Oyuu being the only horse to face Sossion in the ballot.

Speaking to Education News, Namisi said that he was going for a seat that was vacant and which traditionally is for the Western region and he is currently working round the clock to ensure that he has full support from the region before making any further declarations.

Some argue that could the two reach to that formula of Mutai running for the National Chairman seat then it will be hard to topple Sossion since he (Sossion) will easily convince the Rift Valley block that they vote for Mutai for National Chairman and him [Sossion] for Secretary General seat.

Considering further that Mutai is only left with almost two years to retirement, then Sossion could possibly pick a candidate from either Western or Central for either of the seats of first or second vice-chair in this election whom he will possibly support to succeed Mutai for National Chair position when he retires.

Another alternative for the Oyuu-Mutai camp is possibly persuading Oyuu to go for the National Chairman while Mutai for the Secretary General seat thereafter, when he[Mutai] will go for retirement they will switch positions; and further put into account Western or Central for either of the seats of first and second vice-chair positions who will succeed Oyuu after switching.

Sources also hinted that this will work considering that majority of branches (19 branches) in Rift Valley fully support Mutai and which he will get almost 80 per cent of the votes.

In Central region, Oyuu has moved swiftly to ensure that he consolidated the regions votes through supporting Patrick Karinga’s candidature for the position of the first National Vice-chairman. Karinga, the Nyeri branch chairman, was a key opponent of Oyuu during the elections of the first National Vice chairman in December 2018 and his candidature by that time was supported by John Matiang’i.

In Nairobi, hopes have been placed to current Deputy Secretary General Hesbon Otieno who will be defending the seat and battling it off with Nairobi branch Executive Secretary Macharia Mugwe. A total of 2, 045 delegates are expected to decide the fate of the union in this year’s election with Rift valley having 600 delegates, Western 278 delegates, Nyanza 320 delegates, Central 220 delegates, Coast 140 delegates, Nairobi 44 delegates and North Eastern 23 delegates.