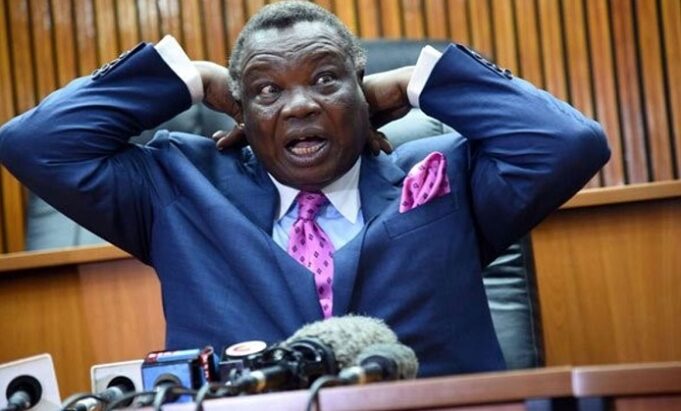 During his interview on KTN News, the COTU boss faulted the Uasin Gishu CDE, Gitonga Mbaka, for not preparing Langas Primary School in an organized manner, ahead of Magoha’s visit.

“The man appeared not to know anything…whether the CS was coming. During our days, if the CS was coming to your area, all schools would be cleaned a week prior to his visit because you do not know where the CS will end up,” argued Atwoli. “The CS is a direct representative of the President…and the President cannot support indiscipline in schools.”

Atwoli mocked the Ethics and Anti-Corruption Commission (EACC) for investigating the incident, terming it unworthy of any serious investigation.

“There must be discipline in our institutions and we must have disciplinarians. When the CS says this is indiscipline…the school is filthy. Some schools have no toilets, are not fenced…classes are not clean…yet that is where we take our children,” Atwoli stated.

Atwoli just joins KNUT in defending the education cabinet secretary. The two unions do not agree with KUPPET over the Langas incident.

KUPPET has demanded an apology from the CS over his disrespectful remarks. Uasin Gishu KUPPET Secretary General Elijah Maiyo questioned the rights of the CS to insult the senior education director.

“We are saddened that the CS, a professor, could insult his fellow civil servant. The conduct of the CS was not expected of him and he should apologize to all the teachers. He should have questioned why the school was in such a state rather than rush to insult an old man,” Maiyo said.

Maiyo threatened the CS that teachers would file a complaint to the human rights department and that they would also cease to accompany him on educational tours, if he fails to apologize to the teachers.

In the video clip, Magoha heaped abuses and chased away Mbaka, blaming him for the untidy state of Langas Primary School.