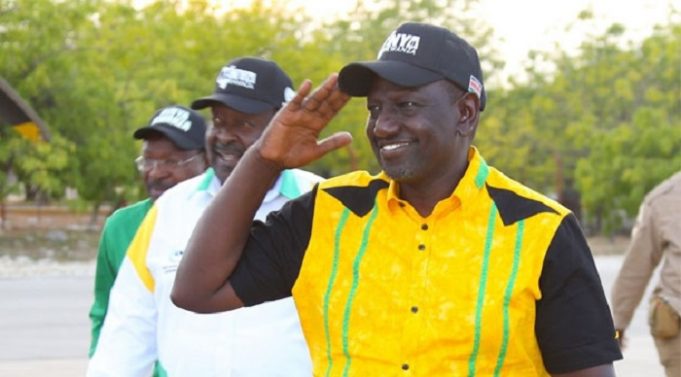 Deputy President William Ruto has supported the Competency Based Curriculum (CBC), saying it is a step in the right direction.
Ruto said his team will continue to have a conversation about CBC and have constant reviews to incorporate concerns raised so far.
“I want to say from the onset that the graduation that has taken place from knowledge and exam based education to the now knowledge, competences, skill and value based education is the right trajectory,” Ruto said.
“It is very important for us to understand that as Kenya Kwanza, we support the progression from knowledge and exam based to the new format of knowledge skills and competences as well as value based education,” the DP, who spoke yesterday during a Kenya Kwanza education stakeholders’ symposium at the Catholic University of Eastern Africa in Nairobi added.

Ruto explained that the conversation Kenya Kwanza wants to have is that reviews be made in line with Unesco guidelines, which gives the latitude that every five years countries have to review their education curriculum and this is the moment.
He said sorting out the education system will remove the gray areas that have occasioned some of the challenges like degrees.
The DP also said it will also help in eliminating cases of people saying they went to school but have no known classmates or lecturers and the courses they did.
Deputy President further noted that his team has heard concerns from parents, teachers and various stakeholders on CBC and as Kenya Kwanza, they are seeking a robust conversation with the public to ensure there is an education system everyone is comfortable with.
This, he said, will lead the country to have quality, relevant and affordable education system.
Ruto made the remarks as Education Cabinet Secretary George Magoha separately applauded the leading political coalitions for promising to retain CBC if they win in the August 9 polls.
Magoha said both Azimio-One Kenya and Kenya Kwanza, which had earlier threatened to scrap the curriculum if elected in the August poll, had since changed tune and would now retain the system if elected.
“I am now happy that the political class has accepted that CBC is here to stay,”

Magoha said. Speaking in Bungoma when he met education stakeholders, Magoha thanked the two leading coalitions for promising to implement the programme.
“It is good that the big political players will not play around with our children like chess,” the CS said.He said CBC is here to stay and asked parents not be misled by detractors.
And at the symposium held at Catholic University of Eastern Africa, Ruto said education is responsible for shaping and sharpening the country’s human capital.
He said today, the biggest contributor to Gross Domestic Product in terms of resources that raised as Government comes from human capital. “Education is the single most enabler of our human capital and that is why it is probably the most important discussion. We have agreed that as nation it is the single most important contributor to the economy,” he explained.

“As Kenya Kwanza, we decided we will not write our manifesto in some hotel room. We will have a robust engagement and we have collected a lot of views in the many economic fora. That information has been processed towards the final symposium held today,” he added
Ruto also said Kenya Kwanza will be happy to sign a charter with the education sector on agreed parameters on what needs to be done on issues like shortage of teachers, capitation, Higher Education Loans Board and all other areas of the sector.
“We want to engage in a way of arriving at education being the driver for our economic model and making sure bottom up is enabled by the kind of education we have,” Ruto said.
“Access, relevance, affordability and quality are issues we want to have a conversation about so that we can build a human capital to give us the edge to achieve the country’s goals and internationally competitive,” he added.
He said the goal is to ensure there are no half-baked people at the end of education chain but people with quality education.