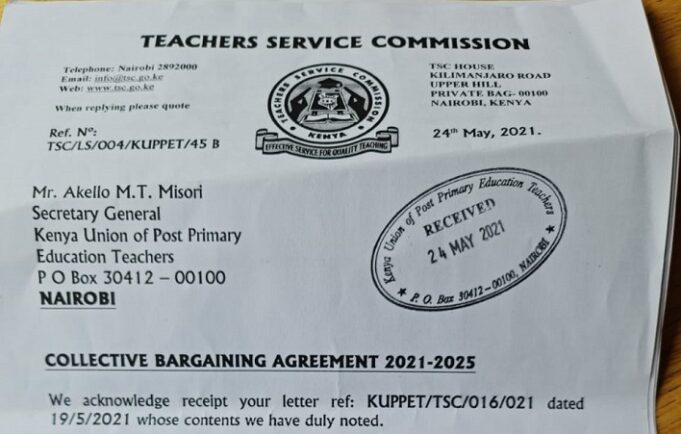 The Kenya union of post primary teachers two weeks ago wrote to the teachers’ service commission, TSC, expressing their anxiety and that of teachers over stalled Collective bargaining agreement negotiations.

“I am writing to express our concern at the commissions delay in concluding the negotiations for the new collective bargaining agreement, CBA. With the expiry of the current CBA imminent, the union is yet to receive a counter offer to our demand, as per the laid down process,” reads the introduction part of the letter.

KUPPET confirmed in the letter that what remained before the counter offer was an Advisory from the salaries and remuneration commission, which the union has waited for for so many months. A counter offer can only be tabled by an employer upon an advisory from SRC.

Additionally, KUPPET Expresses disappointment concerning the speculative covering of what the SRC advisory contained, by the media, yet the union knows nothing about the advisory and the counter offer.

According to the letter, the media coverage has caused deep anxiety among teachers and the anxieties should be addressed urgently through concrete steps to conclude the CBA process within the limited time left.

KUPPET reminds TSC that failure to meet for the negotiations will stretch teachers’ patience to the limits.

With the current CBA ending in June, a new one ought to have been negotiated and signed, awaiting implementation in July.

The teachers service commission has been avoiding negotiation with unions despite their calls for the negotiations of the new CBA. The budget for the next financial year has been concluded and the provision of the 2021-2025 salary review for teachers is missing.

So far, the teachers service commission has responded to KUPPET’S LETTER, acknowledging receipt and concurring that the sentiments are valid. Further, TSC promises that the matter will be addressed in the shortest time possible.

If the negotiations are not done, teachers might miss salary review in July.