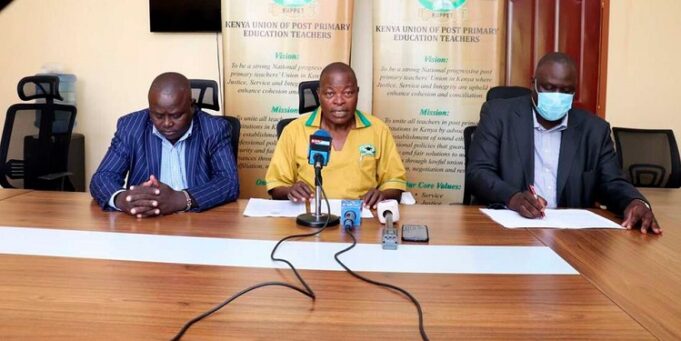 KUPPET has  threatened that teachers will boycott work next month if their employer fails to increase salaries.

The Kenya Union of Post-Primary Education Teachers (Kuppet) says the Teachers Service Commission (TSC) has not negotiated a Collective Bargaining Agreement (CBA) to replace the one that expires at the end of this month.

Kuppet issued a seven-day notice to TSC demanding a counter offer to its 2021-25 proposal, which the union tabled in 2019.

“We wish to state that teachers expect nothing short of a salary review this year,” said Kuppet Secretary-General Akelo Misori.

Negotiations are supposed to have ended and the CBA deposited in court before its implementation from July 1.

Kuppet and TSC officials have had two retreats since the union submitted its proposal.

The TSC has not tabled any counter-offer or initiated negotiations on the one presented.

Mr Misori said the commission has made teachers believe that it is waiting for an advisory from the Salaries and Remuneration Commission (SRC) before presenting a counter-offer.

“We have gathered that the advisory was given but TSC has not shared it with us,” Mr Misori said.

He added that Kuppet wrote a protest letter to TSC, the National Treasury and SRC two weeks ago. Mr Misori said TSC acknowledged the letter but did not give indications of starting the pay negotiations.

In the May 9 letter, Mr Misori asked TSC to address the delayed CBA.

“These circumstances have spawned anxiety in the service. They should be urgently addressed…to conclude the process within the time left,” Mr Misori wrote.

TSC chief executive Nancy Macharia in a May 24 letter signed by commission lawyer, Cavin Anyuor, said she had noted Kuppet’s position on the new CBA.

“The commission is taking all steps to ensure the matter is addressed in the shortest time possible,” Ms Macharia said.

Mr Misori told reporters that TSC has not invited Kuppet to any meeting.

Kuppet chairman, Omboko Milemba, said the delay of a CBA will affect teachers as there would be no binding document to give guidelines on salaries and other matters affecting them.

“We understand the economic situation in Kenya but it should be noted that the roles of teachers in schools have increased. They, therefore, need a salary increase next month,” Mr Milemba said.